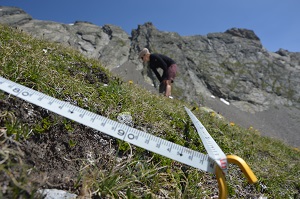 Climate is currently warming at a rapid pace causing species to shift their ranges to follow the conditions they are adapted to. In mountain ecosystems climate is warming at an even higher pace than on global average.
Mountain plant species thus need to accelerate their elevational range dynamics to track their climatic niches.
A recent study, partly based in the Swiss National Park (Gipfelflora), demonstrated that species richness increases on mountain summits have accelerated in accordance with climatic trajectories. During the above-mentioned study, researchers recorded in addition to the composition of the summit flora also the highest occurrence of each plant species along the elevational gradient, both historically (1890 to 1920) and during the recent re-survey (2010-2012). During the re-survey, each highest occurrence as well as the taken route was recorded by GPS and can now be repeated to assess the past and recent rates of upwards shift of alpine and subalpine plant specie